Let’s get into chapter 2 of Ijeoma Oluo’s So You Want to Talk About Race!

It’s been hard in recent years to talk about reverse racism, which I don’t believe exists. Racism is prejudice based on race, but there’s always felt like something is missing when white people complain about being treated in a racist manner.

What’s missing is power, exploitation and generations of systemic white supremacy. I have never been called a racist name. In my life. There’s some special kind of entitlement. I’m sure I’ve been discriminated against because of my skin colour, but I don’t think that because there’s a social power imbalance between races that it’s ok if I am discriminated against, that this mythical reverse racism is ok or to be expected.

Chapter 2 of Oluo’s book establishes a definition of racism that addresses this power thing. She acknowledges that racism is prejudice against someone because of their race, but her focus in her book is that kind of prejudice “when those views are reinforced by systems of power.” And she spends the chapter exploring the value of this focus.

This is a deeply useful way of contending with this reverse racism invention. Racism is racism. But when it’s a racial group that has systemic power, and they’re treated in a discriminatory fashion, THEY even notice the feeling that it’s some kind of reversal, which recognizes the power imbalance. Thus, the word “reverse,” as if the natural order of racism is from a power group to a disempowered group.

That’s why Oluo’s working definition of racism in her book covers systems of power that reinforce prejudice, systems that extend tentacles into all aspects of social, economic and political life.

And that’s why whenever we talk about race and how race exists in social, economic or political issues, we have to look at systemic power as well. We simply must. 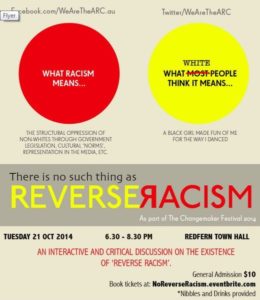